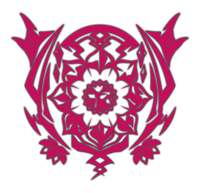 Ren had shoulder length blue hair and matching eyes. He is noted to resemble both Mercurius and Lotus. When he starts using Die Ewigkeit, he gain's Mercurius symbol, a caduceus, in each eye.

Ren Fujii was created by Karl Ernst Krafft, also known as Mercurius, as his substitute, who would fill seat XIII of the Obsidian Round Table in his place during the battle at the Eastern Shambhala, Suwahara City, which would see the resurrection of Reinhard Heydrich and the erasure of the world of Eternal Recurrence, which the Golden Beast plans to wash away with his own world. As his substitute, Zarathustra (Ren's magic name and identification within the LDO) would serve (capitalizing in the hatred the rest of the Beast's Fangs feel against Mercurius) as the opponent they'd have to face once they arrived to the city, in order to open the eight Swastika scattered over the city, as mere bloodshed won't serve to complete the Transmutation of Gold as needed. Therefore, true battles would be needed and, as long as a majority of the Swastika open due to battling and not one sided massacres, the Longinus Dreizehn Orden's goals will be fulfilled. This role exists alongside another; to be Reinhard's promised opponent, who would truly push him to his limits, so he could fulfill his wish of fighting with his full strength against an adversary that can withstand it, and that opponent that will take the shape of his sworn friend substitute, upon reaching the peak of its powers.

Ren's birth took place at the exact time the Obsidian Round Table's seats were filled. He's the other half of the being that came to be known as Machina, using Lotus Reichhart's soul as the basis for his consciousness, and later fused with Mercurius' blood. This way, not only did Ren have the potential to achieve Godhood, but he also effectively became Mercurius' shadow, his very own Ahnenerbe.

Despite being created so many years prior to the story's start, it still took long for Ren to gain awareness, and more so to reach a point in which he could serve his purpose. For that reason, he was entrusted to a descendant of members of ODESSA in Japan, organization that helped Nazis to escape persecution. The man, named Kouzou Ayase, claimed that Ren's parents had died in an accident and, given they were his dearest friends, he was tasked to be his adoptive father. The infant Ren, despite harboring doubts about having parents at all, believed Mr Ayase. He got into the Ayase family, made of the man, his wife and their daughter, Kasumi, as if he were one of their own. It is during these peaceful years with the Ayase family that he met his best friend, Shirou Yusa.

However, the bliss of a happy family life did not last. One day, in 1995 (back when Ren and Shirou were only 6 years old), Shirou murdered Mr. Ayase, with Ren helping in covering the crime up. Though Mr. Ayase died from being stabbed in the neck, courtesy of Shirou, they managed to hide the corpse for a time and, after that, mask his death as a complete accident, making it seems as if he had fallen upon one of the blades he kept at home. Being children, of course, no one would think they were murderers. Furthermore, the discovery of a torture room in the man's basement further cemented him as not being a completely innocent man. Kasumi and her mother remained, of course, unaware of Ren and Shirou's involvement.

Ren, Kasumi and Shirou moved together to Suwahara City two years prior to the start of the main story. They lived in the same apartment block, Ren's apartment being in between Shirou and Kasumi's. Apparently, Kasumi's mom wouldn't let her move if they didn't live in the same building. Shirou didn't waste a second a brought down the wall between his and Ren's apartment using a hammer, so he could access it quickly. However, in 2006, two months before the story begins, Ren and Shirou have a brutal fistfight in Tsukinosawa High's rooftop. Shirou, claiming that he is tired of their boring, daily life, and wants to play with all variables available to him, plans to tell Kasumi about the truth of her father's murder. Ren, unwilling to let his best friend ruin his daily life, begins with the fight. In the aftermath, they are found lying in the rooftop by their upperclassman, Rea Himuro, whom the group had struck a solid friendship with since they arrived in Suwahara City, who calls an ambulance to take them both to the hospital, as both their bodies have suffered many injuries.

Two months after his fight with Shirou, Ren's recovery in the hospital has ended, and thus, he's ready to continue with his normal life once again. After getting everything sorted out, Ren leaves the hospital and heads straight for home before Kasumi has a chance to arrive. However, and to Ren's surprise, he bumps into Kasumi on his way home, who had skipped school just to pick Ren up. After some bickering, Kasumi offers Ren to go on a date, a plan which she is quick to inform her friend is not hers, but Himuro's. Their upperclassman handed Kasumi two tickets for the blade exposition in Suwahara City's Museum, so that's what their date is going to be.

Upon arriving at the Museum, Ren is not comfortable at all, primarily because he has an irrational dislike of blades (probably due to the incident of Mr Ayase's death), specially when they are weapons, as the majority of objects in the exposition are. Just when they are going to leave, Ren sees himself attracted to an object not in the exposition, by a mysterious voice. The object in question is a guillotine, an instrument used in executions during the French Revolution. Being repulsed by it, Ren and Kasumi decide to leave, but not before Ren sees the specter of a girl in front of the guillotine.

Back at their apartment block (Shirou doesn't live near them anymore, as he disappeared shortly after getting to the hospital) Ren rets after having a panic attack at the Museum.

At the end of Marie's Route Ren battles Reinhard, and their fight creates a singularity which leads them to the Marie's Twilight Beach where Mercurius awaits. The Fourth Heaven interuppts their fight, taking the oppurtunity to explain his intentions before allowing the two to continue. Ren decieds to finish his fight with Reinhard without Marie's help, leaving her to deal with Mercurius. Ren manages to defeat Reinhard, an Maries takes the throne for herself with Ren and Mercurius (and later a reincarnated Reinhard) acting as her guardians.

At the end of Rea's Route Ren battles Reinhard, and their fight creates a singularity which leads them to the throne where Mercurius awaits. All three proceed to fight to take the throne, with Ren emerging victorious. He the allows Marie to take the throne.

Marie creates a world were Mercurius never existed and, as Ren's existence is tied directly to Mercurius, Ren ceases to exist as well. However, through pure chance, in Marie's world Ren does exist as Rusulka and Lotus's grandson. He eventually runs into Rea and several years later the two marry.

After the events of Marie's Route, Ren, who had ascended to godhood during his battle with Reinhard lived on in the world she had created up until 8000 years before the events of Kajiri Kamui Kagura, when Hajun ascended to the throne and slaughtered Marie, Reinhard and Mercurius. Ren only escaped due to Hajun never noticing his existence. At which time, Ren used his law to stop Hajun's world from coming into effect and to preserve Marie's world. He was given the name Tenma Yato and created his legion, the Yatsukahagi, which protected the land of Edo and the remains of Marie.

Ren, along with the other Hadou Gods, was revived by Naraka for an mysterious purpose.

Ren's unnamed Assiah allows him to form invisible blades that can cut things from a distance.

While Bois de Justice is Ren's personal Holy Relic, because he holds Mercurius's blood, he has the capacity wield any Holy Relic.

Ren's primary weapon, gifted to him by Mercurius to connect his soul to Marie's. It manifests as a scythe like extension on his right arm. Due to Marie's curse, as long as he can make contact with the target's neck, Ren can permanently kill anyone through immediate decapitation.

Ren acquires Beatrice's Holy Relic during the events of Kei's Route. With it, Ren can transform his blood into lightning.

Eine Faust Overture is Ren's Briah. It is a Gudou-type Briah that accelerates Ren's time when activated, giving him an effect similar to superhuman speed. When activated, Ren can move fast enough that to him, a bolt of lightning appears completely still.

Eine Faust Scherzo is acquired during Kei's Route. His desire being, "I don't want the dead to live", It allows Ren to kill the living dead, such as member's of the LDO.

Eine Faust Finale is Ren's briah in Rea's Route. Ren forcibly draws out the power of every drop of Mercurius' blood in his veins, transforming himself into a monstrous form with black skin, red hair, and the scythes of Bois de Justice coming out of his back. Aside from accelerating his own time like Overture, it also allows him to slow down everything around him, making him even faster.

Res Novae - Also Sprach Zarathustra, based of Ren's desire, "I want this moment to last for eternity", is Ren's Atziluth & his Law as a Hadou God. When activated, time is stopped in all realms of existence, even in realms where the concept of time does not usually exist, such as the throne. Ren and his allies are unaffected by the time stop, but anyone else has to be equal to or stronger then Ren to remain unaffected.

Retrieved from "https://shinzabansho.fandom.com/wiki/Ren_Fujii?oldid=8448"
Community content is available under CC-BY-SA unless otherwise noted.